THIS HAS MADE MY DAY

Oh.. oh I don't know what to say. This made me laugh sooooooooo much! and I say "yay" to Airi singing in English!... if she improves her pronunciation more. Although I have to say, they both were pretty good!
..Oh the hilarity.. gosh... in a good mood~
10/TEN-RisuTEN
Posted by risusaTEN at 23:24 3 comments: 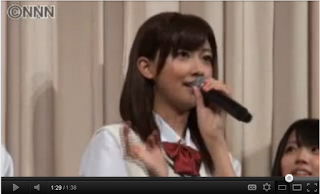 This has no relevance to anything... I just thought it was funny...
Ahh to be tall... or average sized in the UK.
Anyway, happy belated birthday to Momoko! We seriously love you at risusaTEN!
-RisuTEN
Posted by risusaTEN at 14:46 No comments:

Someone, please teach those T-ara fans some manners!

Recently Momo and Miyabi received some undeserved rudeness
for the story please follow the link below
http://aramatheydidnt.livejournal.com/3469702.html?page=2#comments
seriously I want to see this show!
(and remember those faces....lolol)
but seriously, what? did no one teach them manners?
I can't believe how rude some people can be, how can they openly attack them like that, when they don't even know Berryz, if you did, you'd know Momoko isn't actually like that. and I don't know why they attacked miyabi or chi (if they did)
so yeah I wanted to watch the video before commenting, but it might not even be released.
and if I understood correctly, T-ara was on the show too, what did they do? just let it happen?
I do feel bad for them, having such rude fans, they must have been embarassed.
and of course I understand not all T-ara fans are like this, I'm just talking about 'those' fans.
I wonder if they were japanese or korean too.
I wonder if any action would be taken, I heard someone say T-ara had to apologize to them 3.
I think someone should give an apology! I'm in no way mad at T-ara, but if I was them I would want to apologize.
and also those fans probably caused some hate for T-ara
which shows they don't think about consequences =.=
To wish someone death is an awful thing, it shows how they're uncivilized.
I really hope Miyabi didn't get too hurt by it, because as people say for 1 antifan there's like 20 fans.
and I'm proud Momo is such a strong girl! go momo!
I hope they can come out of this stronger
cause I guess fools can only say foolish things
and wish berryz lots of success, so they can shove it in those haters faces
I read a comment which made me lol
quote "Miya,show your curse words to your haters (just like what you have done in your movie "Gomennasai") :))"
What do you think?
UsaTEN


I was outraged when I saw this too and immediately had to text Usagi about this incident.

From 2ch it's said that when they yelled "Kawaikunai!" to Miyabi, backstage, Momoko was yelling: Who could say that to Miyabi!??
^ if that's true then I really do absolutely love Momo who in my eyes will always be one of the maturest members there are despite having to keep this "burikko" image all of the time.
Poor Miyabi had to fight back her tears. I wonder how Chi felt too?
This was an outside event apparently so I suppose it could have been harder to remove these people but they should have tried! These poor girls...
If I was T-ara I'd want to apologise too or tell the fans to ssh (then again they probably didn't understand what was going on). It's incredibly rude and moreover, it's only making people hate kpop fans even more when of course not all of them are like this. Plus, I don't think T-ara deserves any hate for this themselves since it was only these few idiots.
I hope this didn't get to Miyabi too much. I bet Momo probably gets this sort of abuse all of the time too so she wanted to defend her team mate.
I wonder if they'll still air this event.