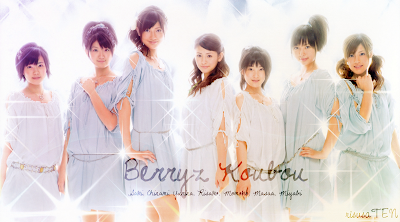 Berryz 工房
Berryz Koubou is an all girl group from Hello!Project, it is the first group created from the H!P Kids with 8 members, originally Tsunku intended to swop the members around from H!P Kids therefore the name means Berryz Workshop, but this idea was dropped. Their debut single is Anata Nashi de wa Ikite Yukenai which was released on March 3rd. Outside of Japan they have performed in Korea, Hawaii and Thailand.

Awards and Achievements
They made news headlines when their concert at Saitama Super Area, was fully booked two months in advance. Not only that, but they made history as the youngest group to perform with members with an average age of 14 at that time.
Berryz won the festival's Best New Asian Artist Award in 2008

Line up Changes
In September 2005 the graduation of Ishimura Maiha was announced, she left to focus on her studies.


She was the second oldest in H!P Kids, being the oldest in Berryz Koubou it was decided that she was the leader. Out of all the Hello!Project groups she’s the only one to be called Captain. In Berryz she is the Strawberry because strawberries is the king of berries. She is considered as one of the best dancers in all of H!P. Her name is a combination between the initial of her Grandmother’s name "Sa" and the initial of her Dad's name "Ki", the kanji was decided by her dad through stroke count. She loves pigs, and collects pig-related merchandise, and she has played the piano since she was very young. Her motto is shoshin wo wasurenai (Never forget the original intention)
★☆★


Being the second oldest in Berryz Koubou she is the subleader. In Berryz she is the Peach, because her name Momo means peach. She was supposed to be born on March 3rd, the Festival of Momo, which is why her name is Momoko. She recently said she would like to be an eternal Idol, and she sees herself still being an idol in 50 years. Every year, she will celebrate her anniversary of becoming an idol (June 30th, 2002) with her family. She has her own radio show “Momoko no Puri Puri Princess”, (2009+), she was ranked second out of people’s favourite Radio DJs. She was the lead protagonist in the film Koinu Dan no Monogatari, in 2002, she is considered to be the best actress in H!P Kids. Her motto too is
Shoshin no koro no kimochi wo wasurenai. (Never forget the feelings of the original intention)


Everyone says her voice is very loud, and she’s always hyper that’s why you can tell if something troubles her. She is named after a main character in a past drama. In Berryz she is the Orange because she gives a fresh sensation. Other members call her “granny” because she does things like eat umeboshi and she even had a bag of them on the train. She also says puns all the time and she’s in charge of comedy. Her special skill is badminton and in 4th grade, she ranked 3rd at the prefectural tournament of Badminton. She really enjoys being in the entertainment industry but she hates waking up early.

She's very responsible therefore she’s called mother by the Berryz members. She’s known for her “my pace” character and cool presence. In the Hello Project Winter 2010 concert she won a survey about who has the most beautiful lips, one of the reasons was the amazing volume. She is very strong and the Berryz members voted her as the most powerful. Her name is taken from the name of a daughter of an artist her family likes , the word “A-Sa” is taken from her Mum’s name. She’s scared of water. Her fruit would be Watermelon, because the members think she resembles one. She stars in a film Light Novel no Tanoshii Kakikata.
★☆★


She is well-known as the fashion-leader for Berryz Koubou, and is good at domestic science. Junjun and Linlin personally chose Miyabi to be in their new unit to perform in Shanghai, Miyabi has said she wants to go China. Her berry is Cherry, because her grandmother owns a cherry farm, and she always brings them for the members. The origin of her name was for her to be a graceful girl. Her weak point is when she encounters something disgusting she’ll show a disgusted face. She loves to hear and watch scary things. The most precious thing to her is friends.
★☆★

The tallest member in Hello! Project, and she’s known for her height. She claimed her own name is a bit difficult to say. The meaning of her name is accepting kindness from good friends, not taking the wrong path in life, hoping to move towards a beautiful life. she was chosen to promote rock band Base Ball Bear's new album, "(WHAT IS THE) LOVE & POP" in her first solo CM. In Berryz she would resemble a Pink Grapefruit. She’s very picky about food. Her special skill is jump rope and unicycle. She thought the dance lesson she took before Berryz’s debut, was the hardest thing in her life.


The youngest member but also the most mature. In the Hello Project Winter 2010 concert, she came fifth in the survey about who has the most beautiful lips. She has done quite a lot of acting, she was one of the lead characters in the film "Hotaru no Hoshi", and she also starred in the drama, Shonan Kawarayane Monogatari, in 2003. Risako also worked as a model for Pichi Lemon, a junior fashion magazine, from February 2006 until June 2006. She was the first member from Hello!Project Kids to get a photobook. She was born at times where white pears’ flower was going to bloom, therefore she is name Risako. Also her fruit in Berryz is Chinese pear. Her strong point is that she can feel sympathy for others. Her favourite Berryz song is Himitsu no U.ta.hi.me.

★☆★
Thanks to J-ongaku and Wikipedia for the information
Photos are from Hello!Project
Created by UsaTEN, No Stealing!