Release date is on February 8th, 2012!
Ahh I'll be looking forward to this too since we haven't heard any single announcements from them for a while, Berryz too! I wonder about Buono!'s sigle in January though.. is that DEEP MIND or something else? still so very confused eheh...
-RisuTEN
Posted by risusaTEN at 19:47 No comments:

Well we haven't sorted anything else out but : D this is the main thing!
My god.. I was stressing so much because the server was completely overloading and took really long to load but in the end I managed to get mine and UsaTEN's tickets ^__^
RisuTEN
Posted by risusaTEN at 18:12 3 comments:

And yet again we have a H!P group move on to a foreign country! But this time, it's Berryz again! And they're going back to the states for the AnimeNEXT convention in New Jersey taking place from June 8th to June 10th in 2012.
This exciting no? it's like H!P is trying to start expanding worldwide : O
When's it gonna be C-ute and S/mileage's turn?
-RisuTEN
Posted by risusaTEN at 11:05 6 comments:

sorry I've been invisible, insane amount of work to do xP
but but but
omg!!!
our first believable chance of seeing Buono!!
we MUST try!
Buono! concerts are like saikou!!!
and it was so cute when they saw where they were going!
xD and lol for Momo for when she was trying to say the name
but...why is Buono performing in a place like that..? xD
UsaTEN

Ah it was so cute watching it~ Momoko was pretty calm and Miyabi's like seriously? seriously? and Airi...is running around the stage xD
It was funny when they were discussing what they'd have to do like self-introductions (in a foreigner's accent harhar)

Sooo can't wait! Definitely seeing this! We will blog about it definitely : D 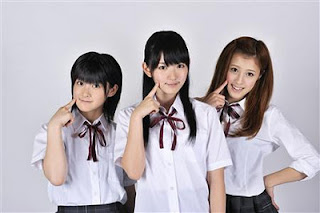 What do you know
even though the single is scheduled for January NEXT year
DEEP MIND is out on itunes....
after deciding if it was the genuine single or not
I decided to purchase it
it's moost probably official cause it's from Up Front (but it's still strange seeing as it's supposed to be out next year)
I want to support Buono as much as possible!
maybe they thought, since people would probably rip the preview and convert it to mp3, might as well give it to them
but one wonders why they don't just give us the whole single
and I'm assuming that this is an official single, because I hear there's a dance shot for this song
anyways
so after a few clicks
voila, DEEP MIND purchased!
it's an awesome song~
so please spare 79p and support buono!!
all you have do to is go on itunes and search Buono! and DEEP MIND should be the first search result!
onegaishimasu >w<
UsaTEN
Posted by risusaTEN at 21:21 2 comments: