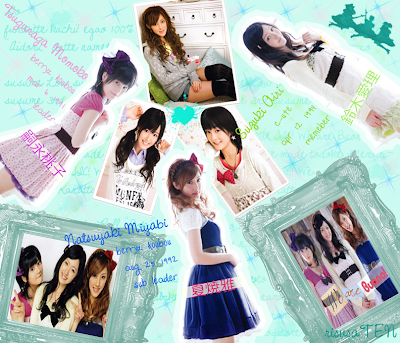 
Buono in Italian means “Good!” or tasty, talking about food. Buono is a Hello! Project unit with three Hello! Project Kids; Tsugunaga Momoko and Natsuyaki Miyabi (Berryz Koubou) and Suzuki Airi (ºC-ute). They were formed to sing for the anime Shugo Chara and they debuted in 2007 with Honto no Jibun, their singles have all been either opening or ending songs. Their music genre is pop and rock. The members take turn to be in the center of their singles; so far they have 3 albums and 10 singles. They’ve also advertised for pizza company “Pizza-la” and waffle company “Pinkdot” stores, they are in commercials and on posters. Known for their cheering songs, they’re character is to think positively.
Members

Tsugunaga Momoko
Started off as a self proclaimed leader of Buono! before officially becoming the leader, this was decided in the first Buono! DVD magazine. She was the center for 4 singles, from Gachinko de Ikou to My Boy and also for the second album Buono! 2. Every time she sings with Buono!, she tries to sing it with all her heart to give the message of the song to everyone, also singing it herself gives her energy.
★☆★

Natsuyaki Miyabi
She started off in the center for Buono! from Honto no Jibun to Kiss! Kiss! Kiss! and for their first album Café Buono! She is the sub leader, first self-proclaimed then Momoko confirmed it. Even though she’s sub leader she says she does feel like she has to take the lead. When she first joined she said to herself that she’d have to be more responsible. In Buono! she tries to sing with a strong, rock singing style. Her moods change dramatically with what she’s wearing.
★☆★

Suzuki Airi
The youngest member of Buono! therefore as she says so herself, can be more carefree in this unit. Started to be in the center from Take it Easy! to Our Songs, also center in their third album We are Buono! She puts more effort when she sings with Buono! Because rock is such a different genre from what she’s used to singing.
★☆★
Buono! TEN out of TEN! ♥

Photos from H!P
Created by UsaTen, No Stealing!