Poll! ~Who is Cuter? 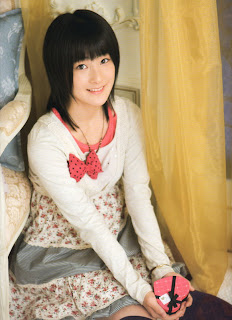 Love her clothes!
A clear win for Momochii!
Tsugunaga Momoko 71% (23)
Michishige Sayumi 28% (9)Total of 32 votes
I'm sure Momo would be very happy^^
xD it's funny with these two, being cute is like a chore (but really for Momo is comes naturally)
even though Momoko is teased by several members about keeping her 'character' or doing it for the fans, she still continues and never gives up! she's a true idol ne?
Even Satoda Mai praises her~
I'll leave you with a cute Momo moment, I'm sure you can see why she really is the cutest of all, Go Momo!
Next time, it's favourite latest song! which group has caught your eye recently? Or which song can't you get out of your head? Vote to say :D
p.s. I know it might be unfair as Maji Bomber only has the song, but we can't leave Berryz out (and tomodachi was a loong time ago) so please judge solely on the song!
and of course thanks for taking part this time, please take part next time as well, the more the merrier~
UsaTEN

Congrats to Momo~ They're both quite burikko but to me, Sayumi gives off a more mature aura than cute! Or at least it's a bit more balanced. Momoko is a cute/weird/funny kind hehe. But only recently on a video I said before that I saw her on this talk show and all these men were saying how cute she was and she said something like: You guys are praising me too much.. *blush*
SO CUTE! Hehe.

Please take part in this next poll~ the songs are kinda mixed up in releases but I hope you all take part anyway~
RisuTEN
Posted by risusaTEN at 20:22 No comments:

Arihara Kanna has opened up her own blog! Yatta!
when I saw the news I just thought...it's about time..xD
She only has one post so far^^
The design is very cute! I'd say simple yet effective, her pictures are very pretty
I hope we see pictures of the current C-ute members too, it'd be nice to know they still keep in touch
I guess we have to thank Erika for this, if Kanna wasn't frequently appearing, she wouldn't know she's sorely missed^^
10/10
UsaTEN

I OMG'd out loud (with my cousins staring at me weirdly) but when I saw this I had to tell Usagi >w
10/TEN
RisuTEN
Posted by risusaTEN at 18:35 2 comments:

Whenever I'm not doing work, I'm sucked into Youtube (or when I'm suppose to be doing work) I loove watching videos, and ever since getting into H!P their's a LOT more videos for me to get distracted by xP
but anyways I thought to share some videos with minna
Usaa's recommendations!
Saa! So the first Video Corner is a versus! Berryz Vs C-ute! Almost...
it's common for the lead singers in the group to perform a song together in a concert, so
First up representing Berryz Koubou
Natsuyaki Miyabi and Sugaya Risako!
TODAY IS MY BIRTHDAY

the quality isn't great, but it's still fun to watch^^ this was in 2005, the Aki Switch on Concert, so quite a whiille ago, they've definitely improved and certainly look different, but I still think the dancing was pretty good in this
From C-ute corner it's Suzuki Airi and Yajima Maimi
ENDLESS LOVE
(they like their english caps don't they xD)
Soo catchy this song! Love the dancing in here as well^^ and better quality, this was in 2007.
though to me, since they lead like every C-ute song, the singing isn't so different if it's just them two
Before I watched the videos I never heard of these songs, but after, it got stuck in my head so that I had to download it..xD
Which performance did you prefer? though I guess it's not really fair since it's two years apart
For me...it's verry close, but I think MaimiAiri wins (also the Berryz vid was a bit too pixelly to my liking xP)
I guess that's also why people say C-ute does better in lives, cause they have two strong main people. On berryz Risako sometimes doesn't perform as well live...still love you though Rii!
Please feel free to leave a comment to say which you prefer^^~
Thanks for reading! UsaTEN
Posted by risusaTEN at 16:22 2 comments:


Today I finished the tests
and I had normal lessons for the first time in ages :3 <3


I think if the tests are handed back
My heart will be thumping a bit but
It seems I'll get them back around next week (゜O゜;)


Today I had World History
lessons but
because I haven't had my tests handed back
Of course, I don't know
how many points I got >_< <3
How.ev.er! <3


Well, when that happens it happens!! :O


Ah, somehow right
This year Suzuki Airi,
has become a commitee member of the Culture Festival~ ;) <3


This year fairly early
we've started the preparations for the Culture Festival <3
Things like what should I do about performances :O


The picture has been
taken from the time
we were studying <3 :O
It's just my friend's fingers
that participated in :3 Wahah

Posted by risusaTEN at 11:32 No comments:

Recently this has been on my mind~

An update from a long time ♪


And yesterday, at the time of the two shot photoshoot and since fans told me to update the blog I wasn't able to do it sorry.


And because it was at night right, I had feelings of being scared and fun feelings and it wasn't incomplete without my heart thumping! (-∀-;)


I wanted to show pictures of them but...


It was dark so they won't taken very well (;_;) unfortunately.


Even so, I definitely want everyone to go and try it out!!

I have a picture of my collection (*^_^*)
About all of the pony's names, there really is a lot of types I've collected (●^ー^●) fufu
From here onwards I thought I want to collect lots moreee but...
Lately, there is another character I've gotten interested in ♪♪♪♪
That is this!
★☆Mickey Mouse☆★
I think there are lots of people who love Mickey mouse but...I've gotten into Vintage Mickey ♪☆☆
It's seriousllly cute ＊＊
I've fallen in love with it ☆
Is how I feel ↑↑↑
When I go to the flea market, I get a good feeling from the old mickeys, I haggle for it and they give it to me for cheap, with more and more I get happy (^m^)☆
I search here and there and I feel I want to gradually collect more! I'll show this another time ok? (*^□^*)v
Right now I'm having a bit of an image change for my bedroom, I've changed all of it such as my furniture! This time I'll make my room will give a feeling of tidyness+cuteness!! Is what I decided
I've tried to collect things of the colour red black and white ☆☆☆
But it's not easy clearing away neatly
I must do my best (>_<)
Also, we're presently doing a Berryz live~~
Those who haven't come yet, definitely come and hang out with us ok?~ ＼(^O^)／
This live too is fully loaded with fun!!!
Miyabi's waiting for you ok!!
Speaking of lives!!
It's decided for Buono! to have a summer live!!!
I'm happy~ ＼(^O^)／ Waai ♪ Waai ♪
What kind of live will it be this time, I'm really looking forward to it ☆
I wonder if we'll be able to be together with everyone in Dolce again?!
I wonder what kind of costumes the costumes will be~?!
What feeling will the stage turn out?!
The songs we'll sing, I wonder if they'll be nostalgic songs?!
I'm already looking forward to it too much, these various things I'm thinking of ♪♪
I wonder if everyone is also feeling the same thing??
Buono!'s lives are really ☆ROCK☆ aren't they!? ≧▽≦★
The tunes are ROCK too and the illumination and such too seem red ☆ black ↑↑↑
I don't know yet what kind of live it'll be but it'll absolutely be a hot and the best live I think
★☆★
Anticipate for it ok〜♪♪♪
miyabi
-------------------------------------
Osashiburi ne Miyabi!! TwT I'm so glad she decided to update...even though it was fans who had to prompt her...but this is great anyway! She seems like such a child still with my little pony and Mickey Mouse hehe...she's too cute. But yaaay~ I'm looking forward to Buono's live!!! But this probably means there won't be a new single muu? -10/TEN  -Risu
Usaa ^v^ ~yatta! finally! and a long one from Miya too~
xD aww my little ponys..I remember them from ages ago, though yeah I agree with Micky Mousee, Miya's a little girl at heart really xD
maybe they'd annouce a new single at their tour? I sure hope so! when she first started talking about Berryz, I was htinking chotto..isn't this a Buono blog? sneaky Miya also promoting Berryz at the same time xDD
now it should be Airi! I'm glad they're not abandoning their blog 10/10

First of all, the theme you first see!!
Picture 1 "Umarete Kite Yokatta"
Although Mai-chan's not here *sweatdrops* the four of us are feeling happiness <3
Because it's a new song, we tried this theme!!

Picture 2 "Tarako"
Nakkii recommended this Wrap Pack to use on our lips, Airi, all of a sudden started writing (Tarako) on her Wrap Pack!!
We *flash* together ^
Observe from what possessed her to write (Tarako) on her mouth ^ ;)
Picture 3 "It really is ChisaMai isn't it"
Iya~, It really is ChisaMai isn't it! ;D things like that I thought, I did and I tried to do *laughs*
From that feeling these were the introduction of those three pictures! <3
From tommorow, those at work, studying
do your best ok!!
Baichaako >w<
--------------------------
*coughs* I recommend you look up Tarako. I'm not quite sure what it is myself; it's something to do with fish eggs or what...but if you look at the pictures...you might understand what Airi was coming from... She's such a strange child. xD But yay more themes!~ Plus Chisa really enjoys these events doesn't she! 8/TEN -Risu
Usaa ^v^ ~xD those wrap packs are really catching one! though I still don't really know what they are 7/10

Posted by risusaTEN at 20:36 No comments: