Polls! Which H!P Group song do you prefer?


Votes so far: 35
Busu ni Naranai Tetsugaku it is
finally I can remember the name of this song
for me I prefer All for One and One for all
because first the PV is more interesting
I love how they start with 1st gen all the way to H!P Kids
and for each members solo shot they are all doing something different, unlike Busu ni Naranai where they just smile with teeth
and it's not so focused on a few members
more than 3 people got solo lines here
and well I just love old H!P more
maybe I would like Busu ni Naranai more if more people got solos
like Miyabi and Momo xP and Risa should have got one too I think
S/mileage and Mano got nothing as well
but if I had to choose like one voice from each group it'll go like....
Morning Musume - Reina
Berryz Kobo - Miyabi
C-ute - Airi
Mano Erina - Mano
S/mileage - Kanon
because I think they have the best voices in their respective groups
and just well more different shots would have mixed it up a bit, it was all the same really
and with all the group shots, you couldn't even see everyone
thanks for voting though~
next poll is
Who are you favourite new members?
you can choose more than one
and even know 9th gen aren't that new, I thought to add them
please vote^^
UsaTEN
Posted by risusaTEN at 14:59 No comments:

Sorry, it's been a while
hope everyone had a nice christmas^^
these are in random orders xD
Kikkawa Yuu
Konna Watashi de Yokkatara
I love the puppet scenes its cute, the editing of PV makes it more interesting, but I don't like the 'white' scenes where she's in the white dress with a beige background, it's really plain, and since the song mentions dance a bit, I think she coulda had a cooler dance
7.5/10
Mano Erina
Glory Days
the pictures are nice, I didn't like the autotune thing at the beginning. the song isn't too bad, but sorry I just don't like her singing voice
6/10
Morning Musume
Pyoko Pyoko Ultra
...I was speechless watching this...
I really don't like their costumes, the worst part are the things they have on their hands, its so awkward
I mean couldn't they have got a better costume designer?
and couldn't they have another (more sensible and appealing) costume as well, like Berryz in Yuke Yuke Monkey Dance
and the song isn't that interesting
the PV looks amateurish, especially the fake blue sky...
this single reallly doesn't sell it for me
and when they're moving their heads left and right...thats more scary than cute to me, especially when you can't see their bodies, looks like they're just a moving head
4.5/10
Hello!Stop
Mano Erina's 1st album is called 'FRIENDS'
2nd album is called 'MORE FRIENDS'
and now 3rd album is called 'MORE FRIENDS OVER'
..........
LOL
can they not think of any better names? I think my suggestion, 'Even More Friends' sounds better than their 3rd album name
the first name is ok
but second and third are just silly
C-ute's 7th album tracklist~
1. Momoiro Sparkling2. Hitorijime Shitakatta Dake na no ni3. Ike! Genki-kun (Hagiwara Mai solo)4. Sekaiichi HAPPY na Onna no ko5. ZUNTAKA MARCH ~Hitorashiku Ikiyou~6. Tokai no NEON ga Odoroku Kurai no Utsukushisa ga Hoshii (Okai Chisato solo)7. Kagayake! Houkago (Nakajima Saki solo)8. Shiawase no Tochuu9. Amazuppai Haru ni Sakurasaku (Original Berikyuu Ver.)10. Seishun Gekijou (C-ute Ver.)
I'm happy that Chisa, Nakki and Mai have solos!
this sounds interesting
hope Berryz give out solos in their new album *cough*Miyabi*cough*
Buono's Hatsukoi Cider will be the ending theme song for Happy MUSIC during January
Yatta! congrats buono! it's a good song
hopefully this gives buono more exposure so they can get more recognition~
UsaTEN
Posted by risusaTEN at 14:49 No comments:

Ahhh it's out! Not too long after Hatsukoi Cider~
This is a nice change from Hatsukoi Cider yet at the same time it's pretty similiar too with just the girls singing at the front with the band in the back. I really like the lighting in this one though and the costumes are pretty H!P like but with a flavour of Buono! (Oh no I think I've been watching too much Pokemon Black and White haha..)
I really like this PV even though it's not really anything special from most of videos. I have to say, the girls look exceptionally pretty in this video. That white light that keeps shining kinda annoys me a little but at the same time it gives that emotion of finding that small light in a dark tunnel huh. I always imagine DEEP MIND to be a song about that. I guess I should really go look up the lyrics now ahah.
What do you guys think?
9/TEN
-RisuTEN
Posted by risusaTEN at 16:59 No comments:

As Airi fans would know..this is her treasured mascot "Su-san" (Although I swear it was yellow rather than white lol) and some hard core Airi fan made a costume and is dancing to Massara Blue Jeans xD
I personally find this hilarious and I hope Airi sees this!
-RisuTEN
Posted by risusaTEN at 11:40 3 comments:

Polls! Who do you think will always win in an argument? 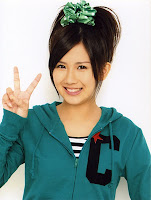 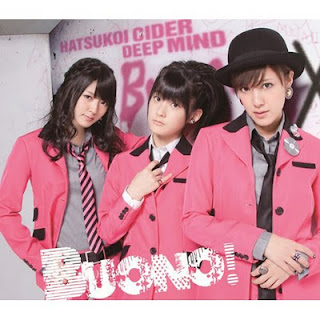 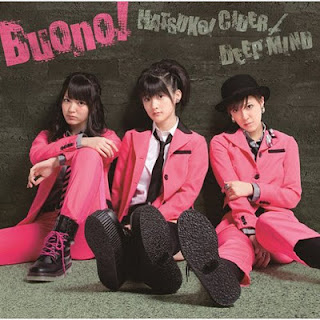 I prefer the regular here
like the brightness
I'm not a fan of the clothes I have to say, mainly the colour, which is sad cause normally Buono has really cool and unique clothes with their individual styles showing...what happened?
Regular 9/10
Limited 7.5/10
Profile

Miyabi why this hairstyle T^T, you look like a boy
but I really like the other two's hair
C-ute
Just a short one
Mai, Nakki and Chisa are going to be in a new stage play with Mai as the star 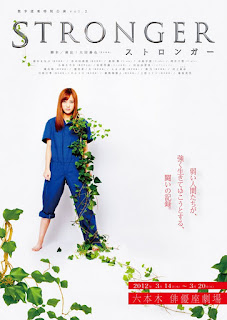 doesn't she look cool
Play will begin in March
Berryz Kobo
oo I was excited when I heard this
new album!
Ai no Uta 8
hmm, wonder if that's a hint of a single name?
coming in February
Dream Morning Musume
PV preview for their single Shining Butterfly
woow they look so pretty! Rika esp
I don't like the costumes they were for the dance though
and the dance itself doesn't seem great
but other than that looks like there's a story and good quality
wonder why Ai is there, since it just skipped to that scene it seems random to me
looking forward to this
9/10
Coming in February again, soo many things in feb!
Lastly
Morning Musume
Easter is here! 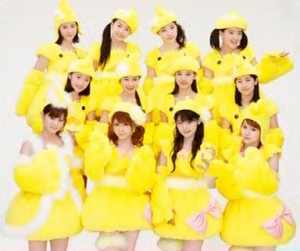 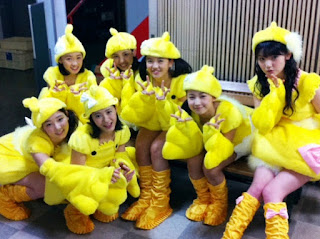 no of course not
it's Momusu's new single costumes
apparently..
well..who doesn't love chicks? xD
I find it hard to believe it's their next costumes...
cause this is just so ridiculous!
and I thought Buono's was bad...xD;
3/10
UsaTEN
Posted by risusaTEN at 19:22 No comments:

Yo yo yo! Sorry for another Buono! update...
But ahh! Watch the PV, watch the PV now!!!!
It's so good. It's so simple yet so amazing. At first when I saw the covers, I didn't like the pink outfits at all but it really suits the PV this time with the grey and white background. Well done producers. You did well.
Anyway the song itself hasn't really stuck to my head yet but I can tell this is gonna be another song I really love too since I'm such a Buono! fanatic. The little cute things the girls did were..so..cute haha and the little signs they made reminded me of that Ting Tings music video... or Perfume since they do stuff like this a lot too.
It's a nice change to see something like this and it's quite sophisticated in my opinion but Buono! have always been in a different league to other H!P groups for me anyway =w=
So what's your guys opinion?


omg!!
It shouldn't be out this early!
bad marketing strategy once again


but that aside
I love it!
It's a nice mellow song that couples well with DEEP MIND


and, omg there's more than just close ups!
it's so cuute! love the different shots and effects


the only problem is the costumes, wish they all had shorts on like Momo
and Miyabi's hair is all pulled back like a tomboy
love Airi's hair


the song is nice, really sweet and brilliant voices as usuall


and the great thing is that this will be the opening and ending song for Sayumi and Reina's drama
so will get looads of promotion!!!
and hopefully show others how amazing buono is and gain more fans^^
9.5/10
UsaTEN
Posted by risusaTEN at 17:55 No comments:

Mano Erina - Doki Doki Baby
haven't seen Mano's PV in a while
I really like the PV! I always love outdoor ones
or where theres more than just close up and dance shots
even though she was just window shopping, the scenes were really pretty
but what's with the red bow and blue dress? clash!
but I think she looks pretty here, and its nice that they did something else with the hair
I'm not a great fan of the song though
and she's in her twenties ne
I think its babyish giving her these cutesy songs...
I wish they could let her grow more, but I know her fans probably like these type of songs =.=
and I still think her voice needs a lot of improving, since she's a solo singer
if she was in a group it wouldn't matter as much.
7/10 for single
8.5/10 for PV
Kikkawa Yuu - Kon na wastashi de Yokattara
the expressions at the beginning are cute!
tbh I didn't get a great impression from her first single
but here, she shows off her voice a lot more
and the song is interesting
there's not much colour in the PV but I quite like her outfit
in one of the shots it looks like she's in the middle of loads of shower cubicles xD
8/10
I have to say it's very cutesy
but I quite like it
like Ayaka and Meimi's lines at the start, the 'koto yuu' bits are really cute
I like the tune at the beginning up to the 'yeahh~'
the PV has a story which is always nice, and it actually relates to the title
but I didn't think much of the dance, and it seems like their skirts got in the way of their actions too
I prefer this single to Tachiaagaru, but I still think this is a silly single name xD
why do they have to bring up miniskirts in everything? Is it not enough that they wear one all the time?
also I do think there should be more shots of Yuuka, as its her last single sadly.
there voices are still too cutesy for me, but apart from that the score is
8/10
I think there should be a rule that, for members last PV, they should get to be the center!
cause I understand why they might not get lots of lines cause when they leave other people have to cover it, but for the PV it won't matter if they get a bit more screentime. It'll make fans happier too.


Mobekimasu - Busu ni Naranai Tetsugaku
there have been more versions of the pv released
but my fave ver is...

Hello!Stop
Ok for some short news now!
the mother of h!p is getting married!
congrats Nakazawa Yuko!
wish you a happy marriage^^
10/10


Dream Morning Musume has a new single!!
called Shining Butterfly
out on february 15th
which reminds me of their gold, glittery and only costume
I'm excited for this, love the old gen!
9/10