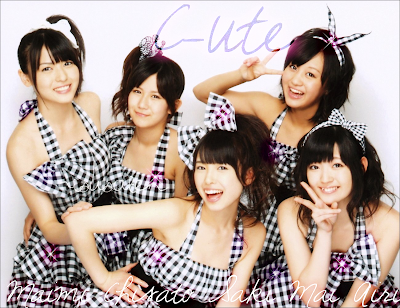 C-ute
C-ute is an all girl group from Hello!Project, it is the second group created from the H!P Kids, with a Hello Pro Egg member to make up the 8th member. Their proper debut single is Sakura Chirari released in 2007, which ranked 3rd on the Oricon Charts and they became the youngest group to rank in the Top 10.
Awards and Achievements
On December 30, 2007, °C-ute received the Japan Record Award for Best New Artist
They received a Gold Award for their single Edo no Temari Uta ii
All of their major singles have been in the Top 10 on the Oricon Charts

Line up Changes
In October 2006 Murakami Megumi left to focus on her studies
In July 2009 Arihara Kanna left, prior to that she had been resting from a bunion deformity
In October 2009 Umeda Erika left to become a fashion model

She became the Leader of C-ute when Umeda Erika who was the oldest in the group felt she wasn’t mature enough and so passed it onto the second oldest. She is considered one of the fastest runners in Hello!Project and she is good at most sports. She describes herself as very forgetful, and she is known to be the cool yet ditsy leader. She takes part in many acting roles such as stage plays, films and live action adaptations, when she was younger she had dreamed of becoming an actress.
★☆★

Her nickname Nakki is a combination of both her names together. She is known for her flexibility and good dance skills. She featured in Morning Musume’s stage play Fashionable and the 3D film Honto ni Atta Kowai Hanashi 3D. She is a semi-regular on the TBS show 'Aimaina'. Her charm point is her front teeth and her weak point is not concentrating in studying. Her hobby is playing on her phone. She became the sub leader after the graduation of Umeda Erika.
★☆★

She is the youngest Hello!Project member to ever lead on a single when she was just 9 years old for the single FIRST KISS. Her father is a professional golfer and her mother was a golfer too. Her favourite character is the Kappa and her favourite manga is "How to take care of your Kappa. Her special skill is the Y-Balance. Her parents called her Airi because they want her to be loved. She loves to make puns.
★☆★

In 2010 Chisato started to upload Dance covers of Hello!Project songs onto the official C-ute channel, this reached 100,000 views in two days. She is the first member of C-ute to release a solo digital single of a cover of LOVE namida iro, she has her own separate itunes listing. Her strong point is making everyone laugh and weak point is fooling around too much. Her younger sister Asuna is a Hello!Project Egg. She is a big fan of Buono!
★☆★

She is the youngest member of Hello!Project Kids, she currently used to hold the record for the youngest participant on NHK's Kouhaku Uta Gassen until 2008. She provided the voice for Mizuki Hikaru in the anime Kirarin Revolution. Her favourite food is Curry Rice and likes to say Otsukareeraisu. In C-ute’s first few indie PVs she is seen wearing sunglasses because she had an operation on her eyes and was sensitive to bright lights. Despite being the youngest she is bold and not afraid to state her opinion.
★☆★
Thanks to J-ongaku and Wikipedia for the information
Photos are from Hello!Project
Created by UsaTEN, No Stealing!