Because I can't stop thinking about it~

Unfortunately, RisuTEN isn't the one with the pictures so this will be just a doodle blog for now.
Initial thoughts
Lately, Hello! Project hasn't been doing much for me and I've slowly moving myself onto Kpop.
It's a sad thought for me since I used to so passionately love all of these girls but I can't help but feel a bit disappointed lately with the lack of attention the big guys seem to give these girls.
Nonetheless, in my heart, three girls had always stuck there as my number one favourite idols and when I found out they were coming to a place near me, there were no words to describe how happy I felt.

I was a bit upset when UsaTEN and I weren't able to gain a signing session spot since I wouldn't be able to meet my idols up close but I was still incredibly grateful that I was able to see them perform anyway.
It was a strange feeling seeing them perform. They were so real and I can only really say that they shone like true idols. They were exactly like how they were from my computer screen and watching them in real life was a big shock to myself.

Arriving at Paris
UsaTEN and I arrived at the La Machine du Moulin Rouge at 5pm. I already knew even an hour early would be too late for us and I worried we weren't able to get a close view of the girls since we were at the back of the line. As soon as we went through the doors, we ran to the stage since it only made sense that we would buy merchandise later since getting a good view was more important. We quickly grabbed some glow sticks -I was given a red one but asked for a green one for Airi and the man said to me: Ah there are only a few left luckily, which made me happy for Airi. 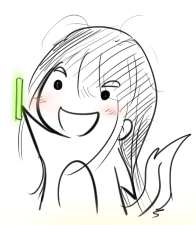 We couldn't get through down the stairs since there were people standing on them so we immediately went to the right. We were struggling for a while to find a good view but I suddenly saw a tiny space between a girl and the cameramen and quickly took it, grabbing UsaTEN behind me.
There I was able to see the stage clearly and closely and I was so proud that I was able to find such a good spot. Eventually, the staff came around with more glow sticks  so I happily took a pink one too for Momoko and thus I had all three colours while UsaTEN had two reds and a pink. 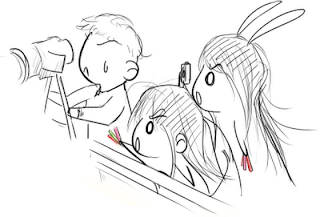 The beginning
The waiting felt like ages but fans were cheering and singing happily to the songs being played on the big screen. I still remember fans screaming crazily whenever Takahashi Ai appeared. But as soon as Hatsukoi Cider came on, everyone cheered and sang. I admit I sang with all my might and even when DEEP MIND came on, trying to pump myself up. However, when I saw the girls walk on stage and heard those beautiful words
"Kiss wo ageru yo, ima kiduite omoi, donna kotoba demo tarinai kara~"
I felt my heart stop. I screamed, my heart was fluttering and I started to well up in tears, it was an indescribable feeling.
I loved every minute of that song and was definitely my favourite song of the concert.
The girls were incredibly adorable and I can't wait to see the recorded version of it. I was actually next to the cameraman for Airi! 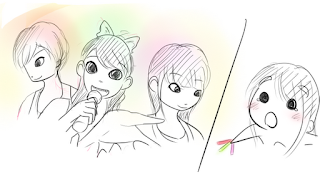 Cute points~
More than just the performing, the little mistakes and MCing the girls did were the highlights of the concert for me. I've always believed that Miyabi fans in concerts were happily the loudest. During the first MC, the translator had to keep telling everyone to be quiet and even went: "Urusai mo!!!". When the girls did their self introductions, Momoko and Airi had their fair share of cheers but with Miyabi's turn...fans screamed her name and began to chant: MIYABI. MIYABI. MIYABI!!!
Seeing Miyabi's happy reaction was cute but moreover that, Momo's reaction was priceless. She quickly got jealous and leaned forward waving her hand and telling everyone to hai hai sshhh and Airi was in the background laughing. The MC were constantly being interrupted by random screaming fans which I'm sure the girls enjoyed. They also stopped for a minute to see a banner the french fans made too.
I'm also not entirely sure what happened here, I think the translator asked a question but one girl disregarded this (?) and just simply yelled out: AIRI AISHITERU!! when given the mic. I found this hilarious but I was also completely jealous! Airi laughed and went: Aishiteru~ and the other two were like =w=; hai hai Aishiteru~ 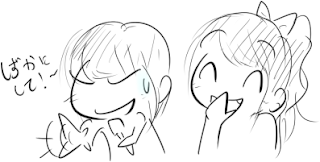 I found it pretty funny how I understood absolutely none of the french but all of the Japanese. So I completely did not comprehended the girls when they attempted to speak French. (I should have worked harder in school eh) I know that they tried to teach French fans the meaning of some characters in their names like "Natsu", "Momo" and "Ai" although I'm sure most of us fans knew what they meant anyway! I felt for Momoko too who had to attempt a few times for the fans to understand her French whom only went: Eh?... in confusion. Seeing that flustered Momoko was too cute.
All three girls had their complete cute points. Miyabi made a slight mistake in the beginning, forgetting to sing.  Her Miyabi beam was brilliant too. Momoko was flawless with her singing and dancing but her random acts of jealousy were incredibly cute but I was surprised how cute I found her in real life anyway. She even did her famous: Yurushite nyan~ ....much to my disliking haha. 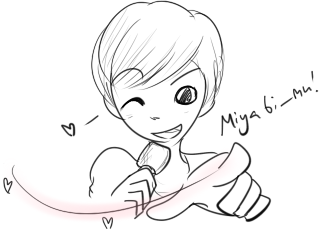 And of course Airi.... As you know, I'm a huge Airi fan. No other idol makes me as happy as she does.
She was just simply beautiful~ I kept going on and on about her much to UsaTEN's dismay hehe.
She looked genuinely happily and was completely radiating with happiness. She smiled so brightly and kissed and waved to fans everywhere. I managed to get a glance from her every now and then and from Momoko too. Well, as I mainly watched Airi, I knew she did quite a few mistakes hehe. She made some singing mistakes but more than that, she kept singing other people's lines and immediately holding her hand to her mouth going oops! and laughing. In Renai Rider, she went to Miyabi's side who quickly held her and went:
No no no no! You're on that side! , pointing where she should have been and Airi laughing at her mistake. 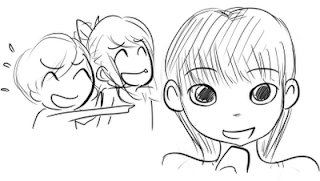 The concert
Their outfits were too cute too~ Although they've worn them before apparently? I can't even remember!
The concert was so fun though. I always find myself having more fun singing along to songs rather than doing the support chants but of course I did a bit of both really. I started to feel exhausted half way through! I was completely over doing myself I think. We did the normal chants of Oi! Oi! Oi Oi! For Rock no Kamisama, the Kiss me baby!  for Kiss! Kiss! Kiss! and all.
The setlist was great honestly! I was surprised they did Independent girl and Juicy He@rt. Personally, I'm not much of a fan of Juicy He@rt so I was a little disappointed they didn't sing a song like Gachinko de Ikou! instead but the performance was great anyway. The concert wasn't very showy and they simply sang and dance which is understandable and well... that's all I can ask for really!

After the concert
After it was over, I really had this strong longing for them. I completely missed them!... We tried to yell for an encore for a good 10 or 15 minutes but unfortunately we were told they wouldn't be doing one. UsaTEN and I decided to run to buy merchandise instead. Everything was sold out unfortunately, apart from the exclusive Paris goods which we sort of were expecting to buy in the first place. We couldn't decide whether to buy the album or not and last minute I went er er D'accord!... and bought it. We had to get two medium shirts since they ran out of small shirts but I'll probably only wear it at home on my lazy days anyway~

Final thoughts
I seriously encourage you guys to do whatever you can do see a concert with your favourite idols and groups!  It's such an amazing feeling seeing the people you idolise the most, do what they do best. If they ever went to Italy, I swear we are following them too haha! Well I hope they go to London really~ I'm going to anticipate another overseas performance since I would say this was a huge success for them. I read the Barks' report too and apparently a lot of teenage girls were crying after the signing session and the girls were really happy with their trip.
Ah Risu is very tired now... so I'm off!
See you guys~