I actually heard this from my friend first before I looked at it... 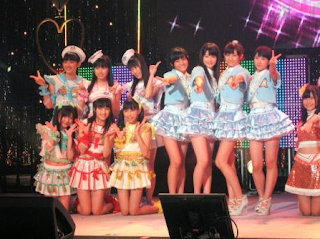 "Idol group S/mileage member Fukuda Kanon (15) threw out a written challenge to 9-member Korean unit SNSD. In an interview Fukuda said with strength and a smile, “SNSD is known as the idols with great legs, but we’re fresher.” “Everyone here, along with our seniors Morning Musume, AKB48 and SNSD are our rivals. But, we have fresh great legs and can’t lose to anyone.” Each member from the other groups just smiled bitterly."
Source from Gator Yoong
Original Text
wao..S/mileage getting ahead of themselves...I don't even know if Morning Musume can beat AKB48 let alone S/mileage..and SNSD, are you serious? they are the most popular girlband in Korea atm and now they're promoting in Japan, there's no way they stand a chance imo..
I mean it's fine to say we won't lose to show fighting spirit, but the way they (or Kanon) said it, and the thing about great legs? and they turned against Morning Musume their 'sister' group tsk tsk...xD
tbh this makes me dislike S/mileage a bit..

seeing this I do agree media exaggerated
however I still think S/mileage comes across as a bit brash xD;
I apologize if I offend any S/mileage fans, but this is what I think^^
UsaTEN
Posted by risusaTEN at 12:47