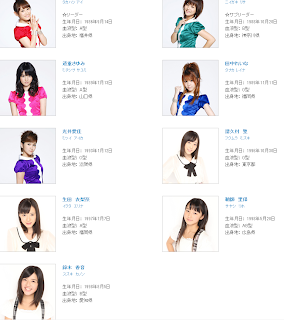 they look so out of place! xD
first off their in white, whilst the others are all colourful
secondly they're so young!
but yup this is the new Morning Musume
Fukumura Mizuki it looks like Riho and Kanon are wearing vests rather than tshirts xD;
Kanon's one looks sweet, it looks like they captured her at the perfect moment of genuine happiness, but I can totall imagine her posing like that for a good 5 mins xD
Erina's pose is cool, but her expression is strange
I don't know why, but Mizuki looks like she's in an awkward position..the way she bends her head..
and Sayashi looks alright, though I think she should smile more xP
so who do you think fits in the most? based on these pictures
UsaTEN
Posted by risusaTEN at 18:28