2011 Calendars released
typical of H!P to release things early to tease you, you can see it but you can't have it (=.=);;
so here's the covers 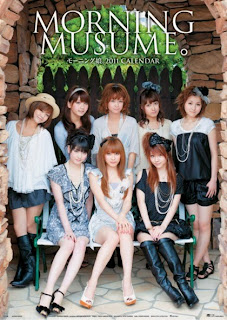 I have to say it looks very nice, the background and the clothes, and I'm glad that Eri, Junjun and Linlin are in it..in fact maybe that's why they took the pictures so early
Sayumi's been promoted to the front, guess she is probably third most popular..
Morning Musume calendars are always like simple and elegant, yes I think that's the theme and it's pretty much their image (my hasn't momusu come along way from the songs like Mr Moonlight and their crazy songs xD)
though Eri and Linlin look unhappy xD;
Berryz Kobo 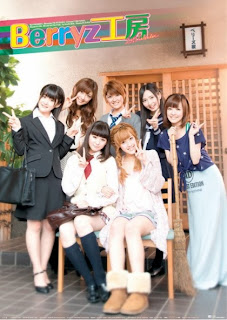 and here we have Berryz and their completely random cover xD
they're all wearing different clothes and I think it's kinda to show their difference in personality..even the title's multicoloured
it's not the best calendar cover but as the picture itself it's really cute, they're all smiling happily with a peace sign
when I first looked at it I just thought wao Miya's hair blonde! xD
must've taken this awhile ago
I do wish they give berryz better clothes, not that these aren't nice..but not for a calendar cover..
but it's waaay better than their last year one, which was Waiters outfits with random rainbows...
but they all look really pretty here^^
C-ute 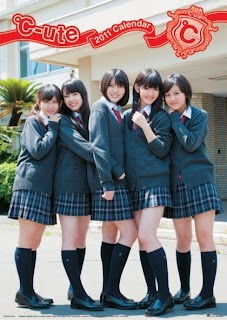 they're loving the school theme, it's Maimi's second time and Airi's third time xD;
but they're all looking very nice^^ smiles all round
though I can't help but notice..Airi's skirt is by far the shortest...
It's a very nice cover but quite plain I must say..couldn't they have more colourful or they each wear a different school uniform?
Mano Erina 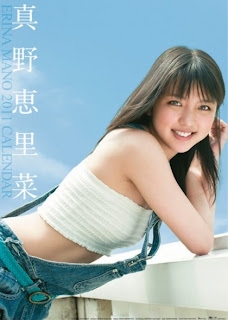 This is quite a nice picture, and quite different to her normal boring covers
though the dungaree looks much too big, kinda strange it's like floating in midair xD
and I'm glad it's kinda different (only slightly) form her normal covers of just her face smiling with long hair..xD;
S/mileage 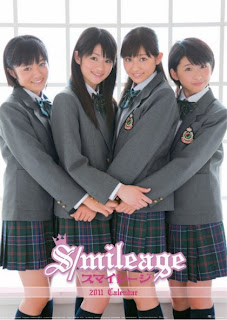 once again with the school theme..
and why's it like the same as C-utes?
this is such a typical S/mileage pose, they're always in that order hugging..
and with boring colours too xD;
well at least they're all smiling, normally one would look awkward xD
they all look cute
In conclusion all the pictures look nice, though Momusu they don't look that happy..guess they're supposed to be looking mature?
I don't have a favourite really..though yeah it looks like Momusu had the most attention and looks the most high class xD;
though I think for calendars they could do better, like not have S/mileage and C-ute wearing the same thing, and make them more different.
what do you think about these covers? like them loathe them? have a favourite?
let us know^^
7/10
now wouldn't it be reallly cool if they had a Buono! calendar? I'd love that!
UsaTEN
Posted by risusaTEN at 23:01